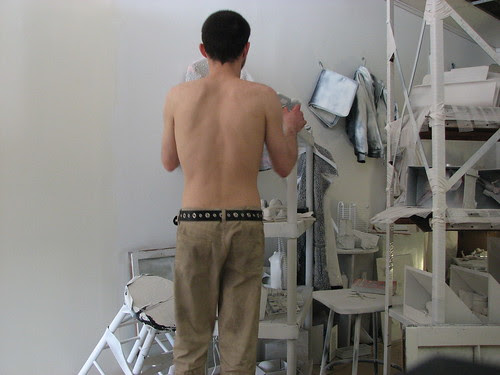 Via Flickr:
Basehouse: A Meditation/ Playplace for Cubby.
Who is cubby and why is he meditating and/ or playing in this space? To further understand these things you must first grab hold of Cubby’s remote control. Walk slowly and carefully through his mazelike world. Look closely at all of his visual ramblings. Turn his world on and off using his remote. Sit where he sat while he thought about the world around him and while he did “other” things. Create a rhythm with the lights and sounds using the remote as he did and become part of this work of art yourself. Just as the artist David Pollack did when he created the character named Cubby.

By turning the camera on himself, and selecting the photographic Genre of self-portraiture, David Pollack is attempting to create a canon of works consisting of probing, surprising, and thoughtful images. Although, the majority of his photographs are pictures of him, however, these photographs are most definitely not self-portraits. Rather, Pollack uses himself as a vehicle for commentary on a variety of issues of the modern world. Pollack employs acting, in particular method acting, to create characters and lifestyles in which these characters choose to exist. He employs concepts of method acting to create characters, such as Cubby. He lives his life completely immersed in these characters lifestyles for years before building his installations ands then finally photographing himself as these characters. His final artworks are stunning full scale installation, sculpture and photography as seen here in Basehouse: A Meditation/ Playplace for Cubby.

This work of Immersion art is performed by Chase Alias and photographed by David Pollack. Immersion Artistist David Pollack spends years developing his characters. The development of these two characters happened over a period of 7 years. Cubby's Basehouse and then Chase Alias' Craigslist are David's newest series of works.

Immersion Art, Method Acting s a phrase that loosely refers to a family of techniques by which actors try to create in themselves the thoughts and emotions of their characters in an effort to develop lifelike performances. It can be contrasted with more classical forms of acting, in which actors simulate thoughts and emotions of their character through external means, such as vocal intonation or facial expression without psychological involvement on their playing role. Though not all Method actors use the same approach, the "method" in Method acting usually refers to the practice, advocated by Lee Strasberg, by which actors draw upon their own emotions and memories in their portrayals, aided by a set of exercises and practices including sense memory and affective memory.

Affective memory, also known as emotional memory, is an element of Stanislavski's ‘system’ and of Method Acting, two related approaches to acting. Affective memory requires actors to call on personal memories of situations similar (or more recently a situation with similar emotional import) to those of their characters. Stanislavski believed actors needed to take emotion and personality to the stage and call upon it when playing their character. He also explored the use of objectives, the physical body's effect on emotions, and empathizing with the character.

"Emotional recall" is the basis for Lee Strasberg's Method Acting. "Sense memory" is used to refer to the recall of physical sensations surrounding emotional events (instead of the emotions themselves). The use of affective memory remains a controversial topic in acting theory. (Wikipedia 2010)