Twenty-seven artists were displaced because the fair was shut down, a fair organizer said.

Rod Eisenberg, the building owner, told NBC Miami that he has been involved in some legal battles with the city.

Meanwhile, Miami Beach spokeswoman Nannette Rodriguez said that Eisenberg was arrested for violating a cease and desist order. They were "operating this art fair without a special events permit and the building owner is operating the hotel without a license," she said.

She said officials learned that there was a show opening somewhere that didn't have a permit.

"Unfortunately, the victims here are probably the artists," she said. "We learned the artists were staying there as hotel guests." 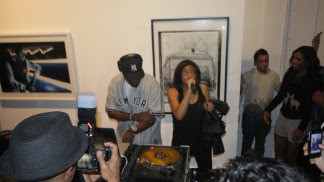 It wasn't known if Eisenberg had an attorney. A telephone message left at a number for the Sadigot Court Hotel wasn't immediately returned.

Thierry Alet, the founder of Pool Art Fair, told NBC Miami the 27 artists participating in the fair have been displaced. Alet said authorities showed up 15 minutes after the art fair opened at 3 p.m.

'They started asking us for permits," Alet said. "Telling us the hotel doesn't have the right to operate the hotel."

At some point the artists went outside, and they temporarily weren't allowed back into hotel, he said.

'When we tried to go back, the police wouldn't let anyone go back. Eventually we went back," said Alet. "I don't understand. Why can't we just sleep there? I don't understand what's the urgency?"

Alet said they chose the hotel because it is well located and each room has suites.

'It's was the first time we had the event there," Alet said. "The fair has been going on for seven years and we never needed a permit at other hotels."

"It's not like we are trying to cheat the law or anything. When we were asked for permit we got it," he added.