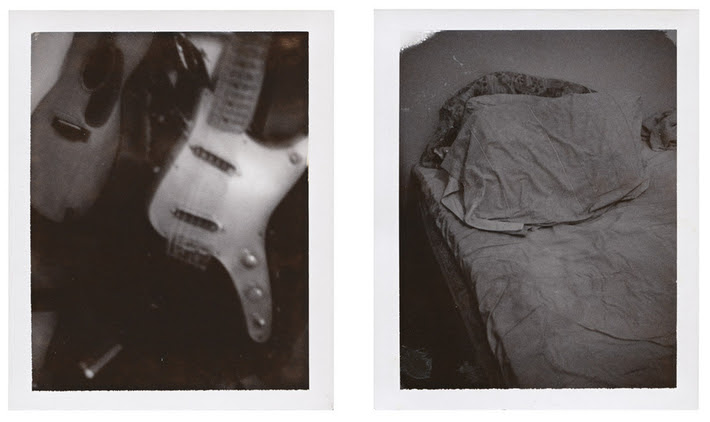 Left to right: Patti Smith, Fender Duo-Sonic, NYC, 2009. Patti Smith, Jim Carroll's Bed, 2011. Images courtesy of the artist and Robert Miller Gallery.
Back when Patti Smith and Robert Mapplethorpe were starving artists living in a mold-infested, closet-sized apartment in Clinton Hill, they took turns visiting museum exhibitions because they could only afford one ticket with Smith’s meager bookstore clerk salary. On their way to the subway station after stopping at the then newly opened Whitney Museum, Mapplethorpe once told Smith, “One day we’ll go in together, and the work will be ours.”
Both of them became successful visual artists adorning prestigious collections and galleries, but Smith’s new exhibition at the Wadsworth Antheneum in Hartford, Camera Solo, is her first museum show. The venue is a natural choice for Smith: Smith’s parents were born in Connecticut, and Sam Wagstaff, Mapplethorpe’s long-term partner and patron, was a contemporary art curator there from 1961 to 1968.
Mapplethorpe said he needed, even just for a little while, to fall in love with his subjects; Smith seems to have taken his advice to heart. All seventy or so of her peaceful, poignant, black and white Polaroid images portray people and places she loved and admired. They are united by, more than anything, a sense of sincerity and gratitude.

Left to right: Robert Mapplethorpe, Calla Lily, 1988, platinum print. Robert Mapplethorpe, Untitled (Patti Smith), 1973, Polaroid. Robert Mapplethorpe, Ken Moody and Robert Sherman, 1984, gelatin silver print. Images courtesy of the Whitney Museum of American Art.
It’s hard to believe these small, quiet, and reverent photographs were produced by the trailblazing queen of punk rock who, the evening of the opening, effortlessly roused an auditorium of middle-aged and elderly Connecticut museum trustees, donors, and the like to mosh feverishly to “People Have the Power.”
Smith’s images are what Wadsworth Director Susan Lubowsky Talbott refers to as “symbolic portraits.” Many of her photographs are elegiac and spiritual: the graves of Modigliani, Brancusi, William Blake, Percey Shelley, and Walt Whitman; Blake’s death mask; the custom-made shoes Robert Mapplethorpe treasured during his last days. Others are pensive snapshots of everyday objects and landmarks – the Eiffel tower, Rimbaud’s utensils, Roberto Bolaño’s chair – that have been important for her artistic development.

Left to right: Patti Smith, Headstone for William Blake, Bunhill Fields, London, 2006. Patti Smith, Roberto Bolaño’s Chair 2, 2010. Patti Smith, Robert’s Slippers, 2002. Images courtesy of the artist and Robert Miller Gallery.
The collection of photos is also supplemented by an eclectic selection of personal relics and prized possessions: her parents’ tea cups, a yellowing photo of Baudelaire she purchased in Paris, a rock from the river where Virginia Woolf drowned herself.
“She tried to kill herself twice. The first time she kept on floating, so the second time she got smarter and put these [rocks] in her coat pocket,” Smith said, with a slight chuckle, to a crew of journalists who weren’t sure whether or not it was appropriate to laugh at the morbid anecdote. She was dressed in a comfortable, rocker-off-duty ensemble of a black trench coat, thick-rimmed glasses, and teased braids.
Death is everywhere in her photos, perhaps because Smith has a gift for projecting life – and its absence – into inanimate objects. She especially wanted to talk about a room in the exhibition entirely devoted to Arthur Rimbaud, a poet she took beatings for reading as a teenager in Pennsylvania. The room has a wooden sculpture in the middle and walls lined with Polaroids of Rimbaud’s belongings. She explained that at one point Rimbaud was suffering from gangrene in his leg, and villagers had to carry him to the Ethiopian shores so he could get on a ship to Marseilles to seek treatment. The centerpiece is a life-size replica of the litter, outlined with thin pieces of black wood and veiled by a black fishing net. Rimbaud’s struggle for life is agitating and palpable.
She photographed the beds of Keats, Woolf, Victor Hugo, and Jim Carroll. “We spend a lot of time in bed,” Smith said. “We conceive in bed, have sex in bed, work in bed, I watch Law & Order in my bed.” Even with the absence of the human body, the beds still “reek of human.”

Left to right: Patti Smith, Virginia Woolf’s Bed II, Monk’s House, 2003. Patti Smith, Cupid, Hermitage, St. Petersburg, 2005. Patti Smith, Victor Hugo’s Bed, Paris, 2006. Images courtesy of the artist and Robert Miller Gallery.
The image of Keats’ bed is particularly striking: white, pristine, and composed in such a way that it appears to be floating. The weight of the absent body is sustained by the shadow swallowing the atmosphere.
Smith first uses a Polaroid camera. Then, without digital alterations, she re-photographs the Polaroid images to make black and white gelatin prints. Her Polaroids are raw and spontaneous yet quiet and picturesque. Objects in her “symbolic portraits” feel content but abandoned, incomplete, left in medias res.
While traces of Mapplethorpe and other twentieth-century photographers are apparent, Smith’s sensibilities are deeply indebted to nineteenth-century photography. When Smith was growing up in New Jersey, she encountered Lewis Carroll’s works while browsing her local public library. Romantic and Victorian lighting, composition, and aesthetics influence many of Smith’s still-lifes.

Left to right: Lewis Carroll, Irene MacDonald, Flo Rankin, and Mary MacDonald at Elm Lodge, 1863. Lewis Carroll, St. George and the Dragon, 1875. Lewis Carroll, Alice Liddell as “The Beggar Maid”, 1859. Images courtesy of the Metropolitan Museum of Art.
“Beauty is a difficult topic for contemporary artists,” said Talbott. “But Smith has produced a truly intimate and beautiful collection.” To Smith, beauty is an abstract, subjective ideal that’s very much rooted in emotions. Towards the end of her performance that night in honor of Rimbaud’s birthday, she read the last letter she wrote to Mapplethorpe days before he died.
“That afternoon, when you fell asleep on my shoulder, I drifted off, too,” she read. “But before I did, it occurred to me looking around at all your things and your work and going through years of your work in my mind, that of all your work, you are still the most beautiful. The most beautiful work of all.”
Sign up for Artlog’s email newsletters, providing access to the best in global art and culture.