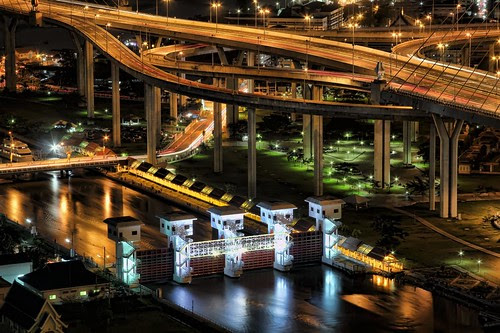 Via Flickr:
A close-up night view of the Bhumibol Bridge and the large sluice gate of Klong Lad Pho, a shortcut canal in Samut Prakan, part of the royal initiative project for Bangkok flood prevention.

The Klong (canal) Lad Pho Sluice Project was a project of His Majesty beginning in 1995 to develop Lad Pho Canal, a natural canal, as a shortcut to quickly sluice water out of the Chao Phraya River to the sea in large volume. Originally, Chao Phraya River flowed to the sea over an 18-km distance through the area of Bang Krajao, with the water's journey taking about five hours. Klong Lad Pho sluice gate, since its operation in 2006, helped shorten the journey to only 10 minutes over a 600-metre distance. The project can sluice water in the highest ratio of 500 cubic metres per second and is the main force to drain the water down the sea in a huge amount during the period during sea rise and when water rushes down from the north annually.