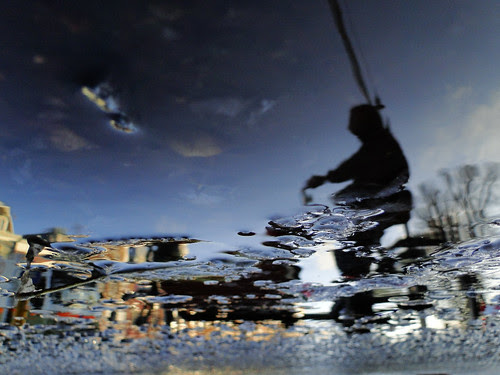 ...Invasion, a photo by AmsterSam - The Wicked Reflectah on Flickr.

Via Flickr:
Unedited shot of a biker in Amsterdam, reflected in a puddle. Taken with my Sony HX1. No editing, no magic tricks, no Photoshop :)

Help!! Amsterdam has been invaded by Bike-eating Aliens, that devour any bike that they can get their slimy hands on, often while the owners are still riding them through the mean streets of the best city in the world! I was lucky enough to capture these horrible events as they happened, in this picture you can actually see a biker being dissolved and sucked into the vortex of the Alien abyss, never to be seen again! I urge the NATO to start bombing the bases of these greedy creatures from outer space before it's too late and there won't be any bikers left! Naturally, I am mostly concerned for my own well-being, as biking is my sole means of transportation, and I'd just hate to get slurped up into the stomach of a Space Invader through a puddle, just to satisfy their need for metal and rubber! SOS! United Nations, where are you? American Army, invade us now, to save us from this Doom-scenario! Heeeeeelp!!! Hahaha :D


Have a good start into the new week!