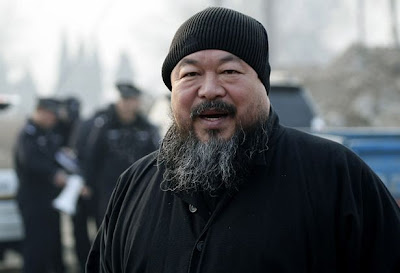 Internationally acclaimed Chinese artist Ai Weiwei has been much in the news lately. On 3 April this year he was detained at the Beijing airport while en route to Hong Kong, and his papers and computers were seized from his studio compound.
In Britain, he is possibly best known for his Tate Modern installation “Sunflower Seeds” that was part of the Unilever series, and was shown between 12 October 2010 and 2 May 2011. Tate Modern: “Sunflower Seeds is made up of millions of small works, each apparently identical, but actually unique. However realistic they may seem, these life-sized sunflower seed husks are in fact intricately hand-crafted in porcelain.
Each seed has been individually sculpted and painted by specialists working in small-scale workshops in the Chinese city of Jingdezhen. Far from being industrially produced, they are the effort of hundreds of skilled hands. Poured into the interior of the Turbine Hall’s vast industrial space, the 100 million seeds form a seemingly infinite landscape.
Porcelain is almost synonymous with China and, to make this work, Ai Weiwei has manipulated traditional methods of crafting what has historically been one of China’s most prized exports. Sunflower Seeds invites us to look more closely at the ‘Made in China’ phenomenon and the geo-politics of cultural and economic exchange today.” 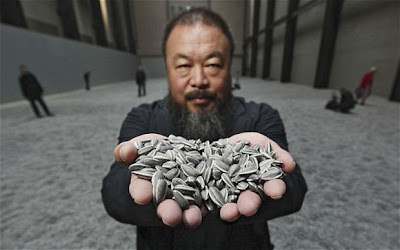 Ai Weiwei (born 1957 Beijing) is a leading Chinese artist, curator, architectural designer, cultural and social commentator and activist. Beginning with the 2008 Sichuan earthquake, Ai has emerged as one of China's most influential bloggers and social activists; he is known for his tongue-in-cheek and sometimes vulgar social commentary, and has had frequent run-ins with Chinese authorities. He was particularly focused at exposing an alleged corruption scandal in the construction of Sichuan schools that collapsed during the earthquake.
Born in Beijing, Ai Weiwei’s father was Chinese poet Ai Qing, who was denounced during the Cultural Revolution and sent off to a labour camp in Xinjiang with his wife, Gao Ying. Ai Weiwei also spent five years there. Ai Weiwei is married to artist Lu Qing.
In 1978 he enrolled in the Beijing Film Academy and was one of the founders of the early avant garde art group the "Stars", together with Ma Desheng, Wang Keping, Huang Rui, Li Shuang, Zhong Acheng and Qu Leilei. In China the group subsequently disbanded in 1983. Ai Weiwei continued to participate in regular Stars group shows, The Stars: Ten Years, 1989 (Hanart Gallery, Hong-Hong and Taipei), and a retrospective exhibition in Beijing in 2007: Origin Point (Today Art Museum, Beijing).
From 1981 to 1993, he lived in the United States, mostly in New York, doing performance art and creating conceptual art by altering readymade objects. In New York he studied at Parsons School of Design. In 1987 he took part in the founding of The Chinese United Overseas Artists Association.
In 1993 Ai returned to China because his father became ill. Back in Beijing, he helped establish the experimental artists' East Village and published a series of three books about this new generation of artists: Black Cover Book (1994), White Cover Book (1995), and Gray Cover Book (1997).
In 2000, he co-curated the notorious art exhibition "Fuck Off" with curator Feng Boyi in Shanghai, China. In 2000, Ai Weiwei moved to Caochangdi where he built a compound of houses and opened his studio REAL/FAKE. In 2006, Ai Weiwei and HHF Architects designed a private residence in Columbia County, New York. According to the New York Times, the house was completed in 2008.


The moon chests series is executed according to a mathematical formula that permits for 81 unique permutations; each cabinet has four apertures that mimic the stages of a lunar eclipse. The chests are constructed from huali wood, an extremely dense and resilient wood that is often used in making chinese furniture, and assembled with expert joinery methods utilizing no nails or screws.


Each work in the marble chairs series weighs a hefty 55 kilograms and is carve from a single block of beautifully striated white marble – rendering a misty, grey landscape within the confines of the classical forms of ming and qing dynasty chairs.


"Forever"  was made from Forever brand bicycles, the leading manufacturer for the Chinese public, that is, before the mass industrial revolution that took place in the 80s and 90s.


“Map of China” is made using Tieli wood from destroyed Qing Dynasty temples. Traditional joinery that poses subtle questions and a critique about China’s perceived domination of Taiwan and regions such as Tibet.

Snake Ceiling was created from school back-packs - the same brand as those used by children killed in the Sichuan Earthquake. The earthquake occurred in August 2008, killing thousands of schoolchildren.

“World Map” is constructed from 2000 layers of cloth cut into components. The work is designed to be extremely labour intensive to install, hinting at China's status as a source of cheap workers for the fabric industry. Weiwei says that the difficulty in joining the components together raised questions around concepts of national unity. "The major problem was to resolve how to hold together a hundred pieces tightly and precisely," Weiwei said. "The map is just the shape of it."

At Somerset House in London, Ai Weiwei has arranged 12 oversized bronze heads of animals, each about 4ft high and weighing about 800lb, and each representing a sign of the Chinese zodiac - rat, tiger, rabbit goat, pig and so on.
The heads are inspired by the water-spouting originals that adorned an 18th-century fountain-clock commissioned by the Emperor Qianlong for his summer pavilion outside Beijing. In 1860, French and British troops looted the palace and carried off the heads. The whereabouts of five are still not known , but the Chinese government wants any of the others that are in Western collections returned.
The irony is that the heads aren’t Chinese. They were designed and modelled in a recognisably European style by the Jesuit missionary Giuseppe Castiglione, a favourite at the imperial court who taught Chinese artists how to synthesise European perspective with traditional painting techniques.

In response to the recent arrest and detainment of Chinese artist Ai Weiwei in Beijing, the Guggenheim has launched an online petition to express concern for Ai’s freedom and call for his release. Leading museums around the world have joined and launched the online petition through their Web sites, Twitter, and Facebook sites, including the Association of Art Museum Directors (AAMD); Museum of Modern Art, New York; Tate, London; Gwangju Biennale, Korea; and the Musée national d'art moderne/Centre de création industrielle, Paris.send to AirPlay!
Posted by Poul Webb at 10:11
Email Post
Labels: Ai WeiWei Chase Alias