A Modern Masterpiece Will Soon Disappear at Kennedy Airport :)(: Destruction of an I. M. Pei

A Modern Masterpiece, No Longer Used, Will Soon Disappear at Kennedy Airport

Terminal 6 at Kennedy International Airport, no longer in use, will be demolished by the end of October.
While ABC has conspicuously begun to celebrate the early jet age, the Port Authority has begun to tear it down.
Terminal 6 at Kennedy International Airport — a crisp island of aesthetic tranquility by the master architect I. M. Pei — is being demolished. The boarding gates are already piles of rubble. The main pavilion, whose white steel roof seems to float ethereally over cascades of diaphanous green glass, is expected to come down by the end of October. 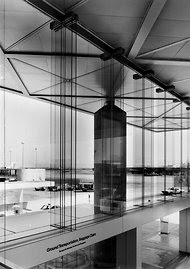 George Cserna/Avery Architectural and Fine Arts Library, Columbia UniversityTerminal 6, as it originally appeared.
Though the demolition has long been planned — since even before JetBlue Airwaysmoved out and into Terminal 5 in 2008 — the timing is unintentionally paradoxical. With the recent debut of the ABC drama “Pan Am,” it seems safe to say there has never been so much popular interest in the Jet Set era of the 1960s and early ’70s. National Airlines, which opened Terminal 6 in December 1969 as the “Sundrome” (it was a hub of New York-to-Miami passenger service), was a high-profile player on that globetrotting stage, most notoriously for christening its jetliners with women’s names and inviting the public to “fly me.”
Mr. Pei, a man of great personal grace, avoided any such outlandishness in his architectural expression. He wanted to create an environment for travelers that was serene, generous, clear, spacious, simple and dignified, recalledHenry N. Cobb, a colleague at Pei Cobb Freed & Partners in New York. To an extent that remains discernible today, he succeeded. In its pronounced horizontality, Terminal 6 still keeps open a welcome segment of sky in the ever-more-congested central terminal area at Kennedy.
“It’s very sad,” Mr. Cobb said on Tuesday about the pending demolition. “The whole thing is very sad.”
While many architects speak of creating transparent spaces, Mr. Pei actually achieved the effect through the complex engineering that underlies the seemingly straightforward structure. The main pavilion of Terminal 6 sits under a deep steel roof truss that rests on the spherical tips of 16 enormous cylindrical concrete columns. That eliminated the need for load-bearing walls, which allowed Mr. Pei to design a pioneering all-glass enclosure that is suspended from the roof truss. Even the supporting mullions between the main window bays are made of glass. One can look all the way through the terminal and out the other side. All sorts of subtle maneuvers make this transparency possible. For instance, rain is drained off the roof in channels that run through the spherical joints between the roof deck and the supporting columns, eliminating the need for any visible ductwork.
In its classical restraint, Mr. Cobb said, Terminal 6 splendidly complements the expressionistic bravura of Eero Saarinen’s landmark Trans World Airlines Flight Center next door, which has been preserved and rehabilitated by the Port Authority of New York and New Jersey, at a cost of more than $20 million, and is to be incorporated into a hotel and conference center planned on the site. 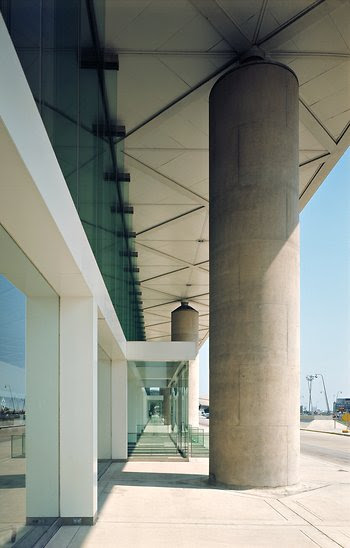 George Cserna/Avery Architectural and Fine Arts Library, Columbia UniversityThe entry colonnade in its early days.
Mr. Cobb said the main pavilion of Terminal 6 is “structurally sound and has proved highly adaptable to changing demands throughout four decades of use” by National, which was acquired in 1980 by Pan American World Airways; by T.W.A., as an annex to the Saarinen terminal; and, from 2000 to 2008, by JetBlue, the last of the Port Authority’s tenants in Terminal 6.
In January, Mr. Cobb made what he called a “last-minute plea for reversal of this death sentence” to David Barger, the president and chief executive of JetBlue. “Conserved and reanimated, the Terminal 6 pavilion would further strengthen the distinctive identity of JetBlue as a sponsor of design excellence and an effective advocate for a sustainable future,” Mr. Cobb wrote. “I. M. Pei joins me in thanking you for your consideration of this request.” (That’s as close as Mr. Pei would ever get to joining anything resembling a fray.)
Mr. Barger said in reply, “While I share your passion for classic terminal designs, I have concluded the time has passed for the pavilion building to serve any functional purpose.” Mr. Barger went on to express his gratitude to Pei Cobb Freed “for your influence on JetBlue’s first decade” and concluded:

I personally commit to advocate for a permanent display of the pavilion photographs and other architectural artifacts so future generations can continue to appreciate the beauty of Terminal 6 and the uniqueness it once brought to J.F.K.

For its part, the Port Authority said, “Unfortunately, space is constrained at J.F.K. and the Terminal 6 location is needed for the improvements that will better serve travelers and help reduce delays.” This means an extension of JetBlue’s Terminal 5, with additional boarding gates and aircraft parking spots. Ron Marsico, a spokesman for the authority, said that simply maintaining Terminal 6 vacant was costing the authority $600,000 a year, “money that can be better spent serving our customers in more useful ways.”
Even the group Docomomo, which is dedicated to the conservation and preservation of Modernist architecture, acknowledged that there seemed to be no chance of a reprieve. “The Port Authority was never interested in that building,” said Nina Rappaport, the chairwoman of the New York metropolitan chapter. “It never fit into their plans.” 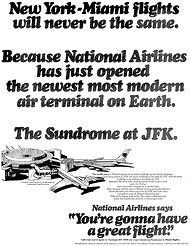 National took out a full-page ad in The New York Times of Dec. 2, 1969 to announce the opening of the terminal.
Mr. Pei and his partners designed the Jacob K. Javits Convention Center, the John F. Kennedy Presidential Library, the East Building of the National Gallery of Art, the United States Holocaust Memorial Museum, additions to the Louvre and the control tower at Kennedy, among other landmarks. Given his stature, the demolition of Terminal 6 arguably ranks as the most significant loss of a transportation building in New York since Pennsylvania Station was razed in the early 1960s.
Mr. Cobb does not think of the two events as analogous, however. “This is not pure greed,” he said. “This is the myopic view of engineers. They just can’t figure out how to reuse it and they don’t put enough value on it to figure out how to reuse it.”
When I first started flying through Kennedy as a teenager, I gravitated naturally to Saarinen’s T.W.A. Flight Center. Its romantic, curving, expressionist design captivated me. Having grown up with the giant shoe boxes of O’Hare, I’d truly never seen anything like it. By contrast, Mr. Pei’s restrained design took time to claim my attention, particularly since it sat quietly next door to Saarinen’s concrete gull wings. But one night in 1972, I grew conscious of how the Sundrome simultaneously warmed and calmed me, sending a glow into the dark through its faceted glass walls and offering the assurance, in all its crisp details, that flying was inherently rational.
Serenity, generosity, clarity, spaciousness, simplicity and dignity aren’t words that describe jet travel today. Little wonder, then, that Terminal 6 has been deemed obsolete. 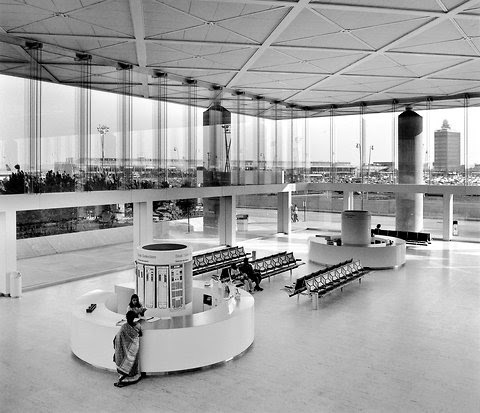