Rain by bossbob50 as Seen by Chase Alias 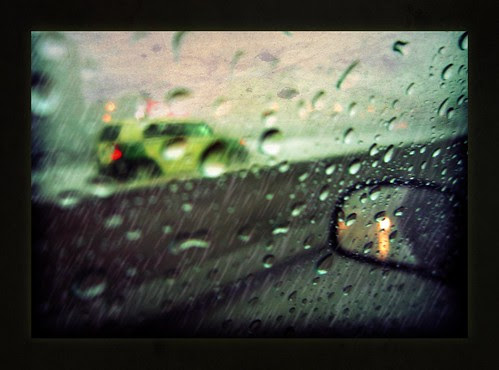 One of those senses-pricking, kick-ass, turn-day-to-dark, summer storms blew in. It flung itself over the city – at about 70 mph - like a heavy, gray velour curtain being pulled over the skyline. Or like one of those 15-mile diameter spaceships casting its ominous shadow as it moves over the cityscape in the Will Smith movie, “Independence Day.”

Morning turned to dusk in five minutes. First the wind howls in and slams into your car like an aggressive linebacker stands up a running back, dead-stop, at the line of scrimmage. Instinctively, you throw up two hands to the steering wheel; hold tight or you get buffeted into an involuntary lane change. Trees sway, lean and tilt almost to the breaking point. Some pass that point: CRACK!

Then, the sky erupts: a Mt. St. Helen’s explosion of water plummets down from the sky. This is not some tinkle morning sprinkle, a namby-pamby rain, or brisk summer showers, but the parted Red Sea collapsing in on itself after the Israelites made it through. Your car is hit with the force of a thousand water balloons thrown by one thousand kids.

But, today, there is no thunder. No lightening. Just incessant rain. Sheets of it. Walls of it. Blinding rain. Blowing sideways. 100% humidity. You may as well be driving under water.

All you can see in front of you are tail lights, popping on and glowing red as drivers - blinded in seconds - hit those brakes with gusto. Our windshield wipers – even the best and the newest of ones – cannot provide a view past the end of your hood. Most of us neglect our wipers: they ain’t the newest, they are far from the best. We see even less.

Inexplicably, I pull out my camera and start shooting through the windshield; then out the driver’s side window. Perhaps "inexplicable" is an excuse word: "creatively reckless" might be more apt.

The cabbie in the lane next to me sees me doing this.

“WTF” can be easily read on the lips, even by those who don’t read lips. He slows down to let the idiot pass him up. I guess that idiot would be me.

You pass under a viaduct and, VOILA’, instant clarity and normal vision. You pass out the other side and it’s as if buckets of water, including the buckets, slam into the windshield. Your wipers sound as if they might fly off either side of the car at any second: whap-whap, whap-whap!

It could only be worse, if there was hail. Pea sized; marble sized, charcoal briquette sized; golf ball sized. They look and sound like icy-meteorites slamming into car hoods, roofs, windshields, side glass and rear windows and doors. But we are spared this - this time.

Heaven help me – but I do love this: it's just a slight shrug of nature's shoulder that we call "natural disasters" or "weather emergency conditions." Cars are swerving, hydroplaning, people pulling off the road, and I’m trying to capture it on camera, and drive “responsibly.” Managed both without death or destruction to anyone or anything, thank you. I ain’t no beginner at this.

Turned the radio way down. Only want to hear the sounds of storm. Human sounds are pitiable in comparison to those of nature (think the sound a hamster makes if you step on its big toe). Opened my window a bit, so the incredible smell of rain-fresh air and feel of water spray could baptize me (I’m in need of a little baptizing of late – make that by water, I’ve just had the fire. I need the cool mists of Heaven to soothe Hell-fire’s, skin-crisping damnation).

Even with the window just open a bit, water will not be denied entry. It get’s the left side of me all…sensuously-moist-to-deeply-saturated in seconds. Womb wet. But, it’s just water: fresh, fresh, clean storm water.

Sinners and converts should be baptized in the drama of wind-driven rainstorms when survival is in question, not dipped – holding one's nose - in the placid waters of slow-drifting rivers or pools. I think they'd take their pieties a bit more seriously with a tad bit of what Noah got in evidence.

I shot about 60 images over the course of five miles, 20 minutes – a bit of a chore with a slow-to-recycle, focuses-wherever-the-hell-it-wants, point-and-shoot (all while dodging other cars and trying to time the shots to go off in-between those whap-whap movements of the wipers).

I chose this image first. I am not sure why. I don't think it is the best of the lot. Maybe I'll do another.

Then, the rains slow down, down, down to an old-man-with-prostate-issues tinkle. Just the darkness of the sky presses overhead. In five minutes the sun began peeking through the cloud cover in spots: light shafts from God and Heaven. It is gorgeous. Even if you don’t believe, for a moment, you believe.

Then the clouds re-solidified, strangling closed the light shafts of heavenly salvation from the tempest, and the wall of rain and cyclone winds hit again. Just to let us know, I think, that the power of all of this is not ours to control: not by hand, machine nor prayer.